From the African-American “circuit” to the Chair of the Congressional Black Caucus, Joyce Beatty has always been close to tennis

"I Always Wanted To Be Somebody": Althea Gibson’s reissued autobiography remains a seminal and significant text

"A lot of things are clicking": Taylor Fritz moves swiftly past Nick Kyrgios in Cincinnati

From the African-American “circuit” to the Chair of the Congressional Black Caucus, Joyce Beatty has always been close to tennis

What better way to leave the stresses of Capitol Hill behind for a few hours? 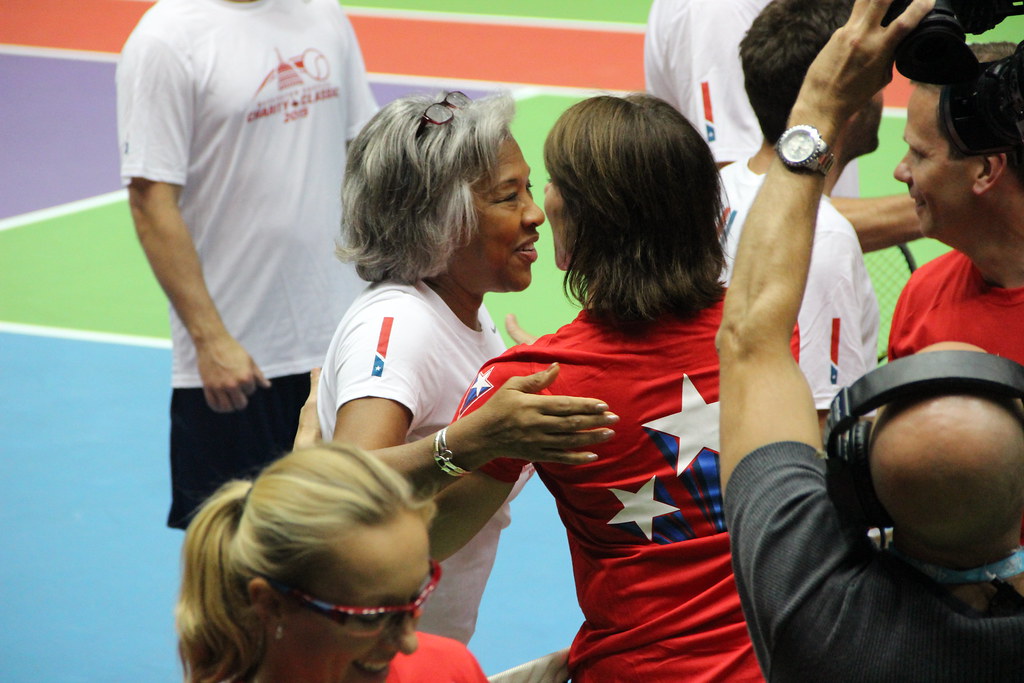 “You look like a tennis player,” the pro told a young Joyce Beatty.

At the time, the future U.S. Congresswoman from Ohio couldn’t be sure exactly what that meant. Beatty was in her 20s, but the Dayton native had never played the traditionally clubby sport, or watched much of it, either. Growing up, there weren’t any courts in her neighborhood, and, other than a glimpse of Althea Gibson or Arthur Ashe, she hadn’t seen a lot of people who looked like her with racquets in their hands.

But this was the late 1970s, the peak of the tennis boom. Courts were sprouting up all over the country, and the sport was shedding its genteel image. One afternoon, as she was driving along with the top of her car down, Beatty was intrigued by what she saw as she passed a local tennis club.

She had been a sprinter as a kid, and she could see that this was a fast-paced game. She could also see, from the mixed-doubles matches that were going on, that it was a sport for men and women, and she liked that. When the club’s pro offered to teach her how to play, Beatty hesitated, before going out to buy a racquet and an outfit. When she came back for her lesson, it was clear that he was right: she not only looked like a tennis player, she played like one, too.

“After teaching me for about an hour, he said I was ready,” Beatty, now 71, recalls. “I took lessons for a month and played my first beginner’s tournament.”

Beatty was elected to the U.S. Congress from Ohio’s third district in 2012.

Beatty’s sporting life had taken a permanent turn. With tennis, she could pair her old love of running and athletics with a newfound love of the face-to-face battle that tennis offers.

“I was very competitive,” Beatty says. “It helped that I was athletic, and faster than most of the people I played with.”

Beatty started as a doubles specialist, and soon placed second in an area tournament. But she quickly discovered that tennis, and especially African-American tennis, had a wider scope than she realized.

“I found out about the American Tennis Association, a league that Black Americans had formed around the country,” Beatty says, a touch of amazement still in her voice. “Pretty soon I was playing tournaments in Atlanta and St. Louis, and traveling on ‘the circuit.’”

When Beatty says “the circuit,” she puts self-deprecating air quotes around the words. But from the time of its founding in 1916, the ATA and its network of tournaments were a major force in U.S. tennis. The organization produced two Grand Slam champions in Gibson and Ashe. The man who coached them, Dr. Robert Johnson, invented the concept of the tennis academy on his backyard courts in Lynchburg, Va. And every year, the ATA held a series of regional and national tournaments, often on the campuses of historically Black colleges. These week-long events formed the core of a thriving, segregation-era African-American tennis community.

One of those colleges was Beatty’s undergraduate alma mater, Central State University, in Wilberforce, Ohio. It was there, at the 1946 ATA nationals, that Johnson first saw a teenage Gibson play.

Johnson was looking for a player who might have the skills needed to break the longstanding color barrier in U.S. tennis. That barrier had kept whites and Blacks on separate courts since the sport’s beginnings in this country in the 1870s, and had kept Blacks from competing in the most important tournaments, including the U.S. Nationals at Forest Hills. Gibson was still raw and volatile at that stage, but underneath the temper, Johnson saw a world-changing talent.

After watching her match in Wilberforce, Johnson and his friend and fellow doctor Hubert Eaton made Gibson an offer: She would leave her home in Harlem to live and train for free with them in the South. She accepted—“Who wouldn’t be interested in a deal like that?” she said—and four years later she erased tennis’ color line for good when she played at Forest Hills. In 1957, Gibson would win the Nationals; in 1968, Ashe, another student of Johnson’s, would follow in her footsteps by winning the first US Open on the same courts. Between 1963 and 1971, Ashe was the only American man to win a major title. That wouldn’t have happened without the ATA.

Johnson’s success as a coach, and in integrating U.S. tennis, eventually made the ATA less essential as a place to develop African-American players. But “the circuit” was still going strong when Beatty joined. In 1972, the ATA’s championship men’s match was broadcast on national TV for the first time. And as Beatty found out when she took a month’s leave to travel and play tournaments, there was still plenty of talent in the organization’s ranks. At one of those events, she faced off against a teenager from Texas with a mean slice backhand named Zina Garrison.

“I saw this young girl with pigtails across the net,” Beatty says with a laugh. “Well, you know how that went. I won one game.

Beatty and Garrison, who would become friends, each had bigger things in store for both of them. In 1990, Garrison reached the final of Wimbledon. In 2000, Beatty began her political career by winning the Ohio House seat previously held by her husband, Otto Beatty Jr. In 2012, she was elected to the U.S. Congress from the state’s third district. Last year she began serving as the Chair of the Congressional Black Caucus. Beatty has made voting rights and affordable housing two of her legislative priorities, and she’s currently serving as the first-ever Chair of the Financial Service Committee’s Subcommittee on Diversity and Inclusion.

Alongside her burgeoning career, Beatty continued to compete in tournaments as an adult. “I couldn’t wait to turn 30, so I didn’t have to play all those people who were younger than me,” she says with a laugh. At 50, she suffered a stroke, and now plays the sport for fun and for her health, and as a way to leave the stresses of Capitol Hill behind for a few hours.

“It’s a great way to stay mentally focused on something besides congressional work,” says Beatty, who has served as a national spokesperson for the American Heart Association. “You have to prepare physically, too, stretch and jog before you can play.”

“I used to rely on my power, but now I like to use a lob, and a crosscourt shot, and drop the ball just over the net,” she says. “I stay back, and then surprise people by charging the net to volley. I like a good net slam.” 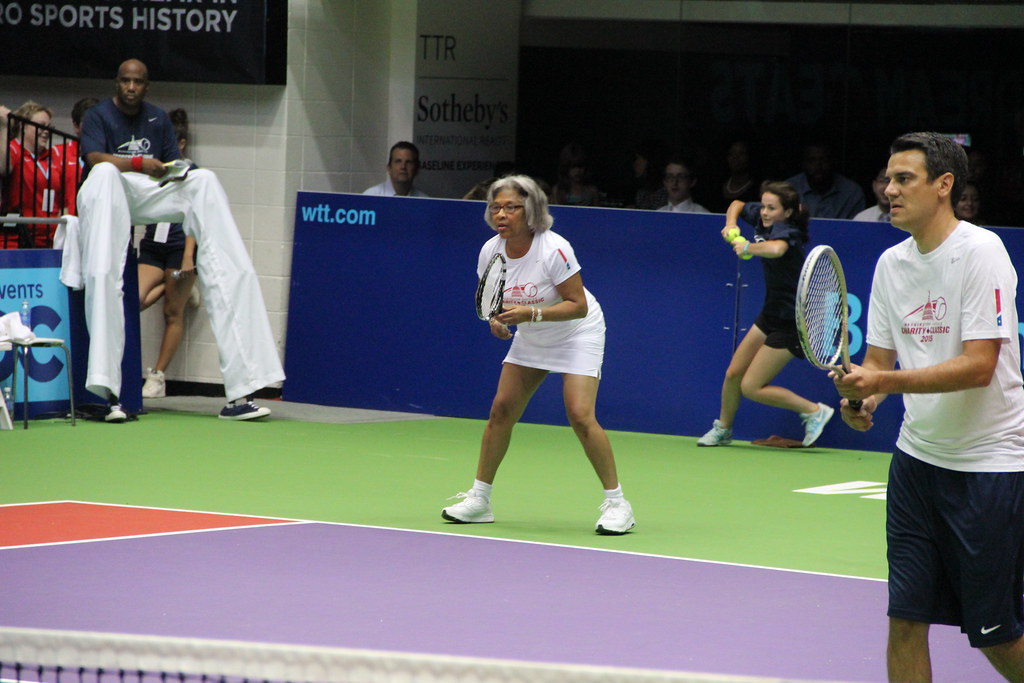 Beatty loves to watch the Williams sisters and Sloane Stephens, and says she’s happy to see how much diversity there is in the U.S. pro game these days.

“Even when I was young, Black parents couldn’t go into country clubs, and you think about what Arthur and Althea had to go through,” she says. “Now there are so many Black and brown people playing tennis.”

But like a lot of fans who first picked up a racquet during the tennis boom, Beatty has a soft spot for the old days, and the “players with attitude.”

“Back then, there was so much attention around [John] McEnroe, [Jimmy] Connors, and Billie Jean King, because they played with so much emotion and passion,” she says. “But I’m glad the sport changed toward civility, too. I like watching the young players now.”

What does Beatty think tennis can do to increase its popularity? She’d like to see more focus on its health benefits, and more stories about young people being drawn to the sport, like the one told in the movie King Richard, about the rise of the Williams sisters.

“A story of a Black girl who moved to a majority [white] neighborhood and was accepted on the court,” Beatty says, “and went on to play tennis in Atlanta and St. Louis and lots of other places.”

A story, perhaps, like Joyce Beatty’s, a young African-American woman who was surprised to learn that she looked like a tennis player. It’s a story that should let everyone know that, whatever your gender or skin color, you can find your way to the game at any age, and use it to expand your horizons wider than you ever expected.